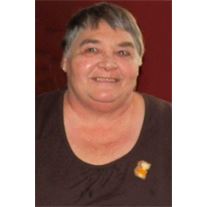 Leah M. “Susie” Pelc, 70, of St. Paul, died Saturday, June 13, 2015, at Brookefield Park in St. Paul. Services will be at 10:30 a.m. Wednesday at the Grace Baptist Church in St. Paul. Pastor Stan Gurney and Pastor Roger Reitz will officiate. Burial will be in the Elmwood Cemetery in St. Paul. Visitation will be Tuesday from 5 to 7 p.m. at Peters Funeral Home in St. Paul. Mrs. Pelc was born on Jan. 16, 1945, at Salida, Colorado, the daughter of Kenneth J. and Leah A. (Crymbal) Thompson. She was united in marriage to Harlan J. Pelc on June 27, 1964, at Buena Vista, Colorado. He preceded her in death on Aug. 31, 2014. She is survived by two sons and daughters-in-law, John and Kristin Pelc and Kenneth and Dorothy Pelc, all of St. Paul; one daughter and son-in-law, Marci and Brian Jordan of Burwell; and one brother and sister-in-law, Jim and Linda Foreman of Buena Vista, CO. She is also survived by 9 grandchildren, Tim Jordan, Bill Jordan, Haylee Jordan, Scott Jordan, DezeRay Pelc, Morgan Pelc, Lukas Pelc, Sarah Pelc and Artina Pelc; one great-granddaughter, Braelin Pelc; brother-in-law and sister-in-law, Arnold and Jean Pelc of Spencer; sisters-in-law and brother-in-law, Nola Miller of Cushing, Delores Nelson of Gregory, SD, Doris Kocian of Butte, and Roger Roth of Spencer. Susie grew up and received her education in Buena Vista. As a young girl she was active in the Rainbow Girls. She was a 1963 graduate of Buena Vista High School. After she and Harlan were married they lived in Buena Vista until 1966, when the couple moved to O'Neill, later living in Spencer and Butte. When living in Butte, the couple milked cows, did custom haying and she worked at the local nursing home. In 1980, they moved to Worms and she worked as a maid for Ramada Inn in Grand Island. In 1984, they moved to St. Paul and she worked at Heritage Living Center for the next 10 years. She then enjoyed retirement and being a grandma. Susie loved crocheting, sewing, cross stitch, gardening, and baking and decorating cakes. In addition to her husband, Harlan, she was preceded in death by her parents and an infant son, Thomas William Pelc. Memorials are suggested to the St. Paul Senior Center or to the family's choice.
To order memorial trees or send flowers to the family in memory of Susie Pelc, please visit our flower store.