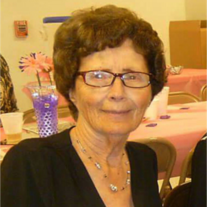 Shirley Ann Jarzynka, 80, of St. Paul, died on Wednesday, March 29, 2017, at CHI Saint Francis in Grand Island, after a brave two year battle with cancer. Mass of Christian Burial will be at 10 a.m. Monday at St. Libory's Catholic Church in St. Libory. The Revs. Sidney Bruggeman and Michael McDermott will concelebrate the Mass. Burial will be in the St. Wenceslaus Cemetery west of St. Paul. Visitation will be Sunday from 4 to 6 p.m. at the church, with a 6 p.m. vigil service. Peters Funeral Home of St. Paul is assisting the family. Shirley was born on April 18, 1936, at Farwell, the daughter of Wilfred E. and Isabelle D. (Chalupsky) Safarik. She was raised on the family farm near Farwell and attended District No. 52 rural school north of Farwell through the 8th grade. She attended St. Paul High School for one year and then finished her education at Farwell High School, graduating in the spring of 1953. Following high school, she was employed at Ordorf's Bakery and later at the Howard Greeley Rural Public Power District in St. Paul, until she became a full time mother in the summer of 1969. Later she was a newspaper carrier, faithfully carrying the Grand Island Independent for 35 years, only retiring after her health declined. She was united in marriage to John G. Jarzynka on May 2, 1961, at St. Paul. The couple made their home in St. Paul. To this union, one daughter, Lurleen was born. Twenty years later, she was blessed with two granddaughters. Shirley was devoted to her “three girls”, whom she loved more than can ever be described in words. She exhibited this in her actions, never missing academic and extracurricular activities (a favorite of which was Hastings College Women's Basketball games). She was a lover of gardening and travel; she had visited all 50 states, Canada and several European countries. She was a member of the Catholic faith and was a former active member of the Council of Catholic Women at Sts. Peter & Paul Catholic Church in St. Paul. She is survived by her husband, John of St. Paul; daughter, Lurleen Statler and Dan Layman of St. Libory; two granddaughters, Dr. Brittney Statler of Pawtucket, Rhode Island and Alicia Statler of St. Libory; sisters and brothers-in-law, Betty and Gilbert Spilger of Grand Island and Noreen and Jim Malone of Lincoln; brother and sister-in-law, Rick and Elaine Safarik of Farwell; two sisters-in-law, Joan and Laverne Schall of Kearney and Jean Douglas of Chesapeake, VA; special friends, Charlie and Alyce Wagner of Wolbach; and nieces and nephews. She was preceded in death by her parents; her in-laws, John and Domicella Jarzynka; and two brothers-in-law, Joe and Jake Jarzynka. Memorials are suggested to the family for later designation. =
To order memorial trees or send flowers to the family in memory of Shirley Ann Jarzynka, please visit our flower store.