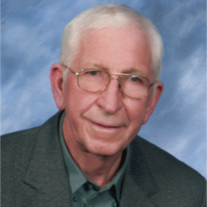 Robert J. “Bob” Kowalski, 80, of Loup City, died Saturday, July 15, 2017, at CHI Health Saint Francis in Grand Island. Mass of Christian Burial will be at 10:00 a.m. Saturday Sept. 16, 2017 at St. Josaphat's Catholic Church in Loup City. The Rev. Richard L. Piontkowski will celebrate the Mass. Inurnment will be in the Evergreen Cemetery in Loup City, with graveside military honors by American Legion Post 48 of Loup City. Peters Funeral Home of Loup City is assisting the family. Bob was born on Aug. 13, 1936, on the family farm northeast of Loup City, the son of Steve and Margaret (Lewandowski) Kowalski. After completing high school in Loup City, Bob began working for the Bureau of Reclamation in 1956, assigned to various public works projects. He served in the United States Army from Dec. 3, 1959 to March 29, 1962. He was united in marriage to Linda Sheffield on Sept. 5, 1965, in Huron, South Dakota. It was Bob's transfer to Bonneville Power Administration that took the couple to the Pacific Northwest, eventually making their home in Kennewick, Washington. As a construction inspector for high-voltage transmission lines, Bob had the opportunity to see many parts of Montana, Idaho, Washington and Oregon. Two places in the Northwest were very special to him: Packwood, Washington and the Oregon coast, and Bob and his family created many memories in these beautiful places. He retired from BPA in 1994 and returned to Loup City for several years to farm. Drawn by family ties to his children and grandchildren, he subsequently moved back to Washington for a time. While there, Bob volunteered at the Kennewick St. Vincent de Paul, where he worked with a group of men to distribute bread to people in need. In 2016, Bob made one final move to Loup City where he lived the rest of his life. He was a member of St. Josaphat's Catholic Church and American Legion Post 48, both of Loup City. Bob enjoyed woodworking, listening to Polka music, golf and card playing. He was a generous, giving soul. When visiting family and friends, Bob almost always arrived with something in hand, whether it was homemade muffins or apple cake, a box of Washington apples, or a crate of Washington cherries. Remaining alive to honor and carry his memory are Bob's three sons, Michael and Denise Kowalski and their daughters, Analiese and Macie; Alan Kowalski and his partner, Tamara “Té” Werner and his sons Cody and Josh; and Rob Kowalski and his partner, Jose Luis Munoz, all of Washington; two sisters, Marian MacFarlane and Betty Kowalski both of Loup City; two brothers and two sisters-in-law, Ken and Jean Kowalski of Loup City , Melvin Kowalski of Randlett, OK and Lillian Kowalski of Kearney. He was preceded in death by his parents; and three brothers, Don, Larry and Richard Kowalski. The family would like to extend their gratitude to all the staff at Rose Lane Campus in Loup City, in particular, the staff in the Rose Court memory care unit for their tireless attentiveness and loving care. In lieu of flowers, memorials are suggested to St. Josaphat's Catholic Church Youth Programs. An additional celebration of life is being planned in Washington at a later date.
To order memorial trees or send flowers to the family in memory of Robert J. Kowalski, please visit our flower store.