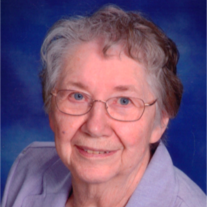 Rita H. Gorecki, 90, of Farwell, died Wednesday, Nov. 21, 2018, at Brookefield Park in St. Paul. Mass of Christian Burial will be 10:30 a.m. Wednesday at St. Anthony's Catholic Church in Farwell. The Revs. Rayappa Konka, David Rykwalder, Thomas Ryan and Deacon Randy Lewandowski will concelebrate the Mass. Burial will be in the St. Anthony's Catholic Cemetery near Farwell. Visitation will be Tuesday from 5 to 7 p.m. at the church, with a 7 p.m. vigil service. Peters Funeral Home of St. Paul is assisting the family. Rita was born on July 2, 1928, near Loup City in Sherman County, the eldest daughter of eight, to Andrew M. and Gertrude (Krolikowski) Waskowiak. She attended Schaupps country school and St. Francis parochial school in Ashton. She graduated from Loup City High School in 1946. She then taught country school north of Ashton for two years. She was united in marriage to Paul Gorecki on June 1, 1948, at St. Josaphat's Catholic Church in Loup City. The couple farmed near Farwell. They later moved to Lexington for a year before returning to a farm north of Farwell. In 1991, the couple moved into Farwell. Paul died on June 22, 2008, and Rita continued to live in her home until October of this year, when she moved to Brookefield Park. She was member of St. Anthony's Catholic Church and its Council of Catholic Women. She also belonged to a monthly card club and breakfast group in Farwell. Rita loved to cook and entertain for her family and friends. She enjoyed baking kolaches, watching “Wheel of Fortune” and praying the rosary several times a day. Rita loved her two granddaughters, but her grandson, Andrew, held a very special place in her heart. She is survived by her daughter, Marge Krings of Columbus; son and daughter-in-law, Don and Kathy Gorecki of Farwell; grandchildren, Amanda and Tony DeLancey of Columbus, Laura and T.J. Oltman of Columbus and Andrew Gorecki of Farwell; five great-grandchildren, Ayshia, McKenna, Brock, Ray and Nash DeLancey of Columbus; seven sisters and one brother-in-law, Evelyn Gorecki of St. Paul, Leona Bendykowski of Arcadia, Alta Mostek of Loup City, Adeline Jonak of Ashton, Loretta Hulinsky of Ashton, Emily Gregoski of St. Paul, and JoAnn and Bernard Danczak of St. Paul; and her “adopted” ninth sister, Sister LeeAnne Danczak of Ord. In addition to her husband, Paul, she was preceded in death by her parents; son-in-law, Ken Krings and six brothers-in-law. In lieu of flowers and plants, memorials are suggested to St. Anthony's Catholic Church and St. Anthony's Catholic Cemetery.
To order memorial trees or send flowers to the family in memory of Rita H. Gorecki, please visit our flower store.