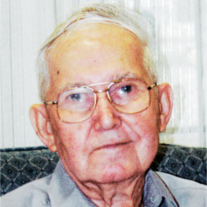 Richard P. Miller, 88, of St. Paul, died Friday, March 9, 2018, at the Howard County Medical Center in St. Paul. Mass of Christian Burial will be 1 p.m. Wednesday at St. Joseph's Catholic Church in Elba. The Rev. Rayappa Konka will celebrate the Mass. Burial will be in the St. Joseph's Catholic Cemetery in Elba with graveside military honors by Carl Mogensen American Legion Post 119 of St. Paul. Visitation will be Tuesday from 5 to 7 p.m. at the church, with a 7 p.m. vigil service and Knights of Columbus rosary. Peters Funeral Home of St. Paul is assisting the family. Richard was born on June 8, 1929, on a farm north of Elba, the son of Joseph and Catherine (Duester) Miller. He grew up on the family farm and attended Howard County District No. 54 rural school. The family later moved to a different farm and he then attended District No. 21. After his schooling he farmed with his father and brothers. He served in the United States Air Force from Dec. 28, 1950 until his discharge on Dec. 24, 1952. Richard lived and farmed with his brother, Bernard, north of Elba until 1995, where he also raised Chinchillas and was a pioneer of organic farming. He continued to farm until 2010, when he moved to Matelyn Retirement Community in St. Paul, where he lived the rest of his life. He was a member of St. Joseph's Catholic Church in Elba, Knights of Columbus Council 1918 of St. Paul, Carl Mogensen American Legion Post 119 of St. Paul, Korean War Veterans Association, served as a U.S. Soil agent, longtime member of the St. Joseph's Catholic Cemetery board, and played his accordion with the Sandhillers music group. He is survived by one brother and sister-in-law, Bernard and Cleetis Miller of Grand Island; good friends and caregivers, Terry and Diane Spilinek of Elba and their children, Justin, Eric and Shari Spilinek; and numerous nieces and nephews. He was preceded in death by his parents; three brothers, Roman, Edmund and Louis Miller; a sister, Catherine Miller and an infant sister. Memorials are suggested to St. Joseph's Catholic Church.
To order memorial trees or send flowers to the family in memory of Richard Paul Miller, please visit our flower store.