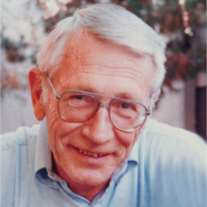 Richard J. “Dick” Ingerle, 86, of Elba, died Sunday, Dec. 10, 2017, at CHI Health Saint Francis in Grand Island, surrounded by his family. Memorial services will be 11 a.m. Saturday, Dec. 16, 2017, at Peters Funeral Home in St. Paul. Rev. Mike Anderson and Pastor Cheryl Anderson will officiate. Inurnment will military honors will be 10 a.m. Monday, Dec. 18, 2017, at Fort McPherson National Cemetery at Maxwell. Richard James Ingerle was born on Feb. 3, 1931, at Lincoln, the son of Louis V. and Jean M. (Kellenbarger) Ingerle. He grew up in Elba where he received his education at Elba Public School and was a 1949 graduate of Elba High School. He enlisted in the United States Air Force on Sept. 11, 1950. He was stationed at Fairchild Air Force Base in Spokane, WA, where he served as a radar gunner on B36 bombers. He was discharged on Sept. 10, 1954. He then attended Gonzaga University in Spokane from 1954 to 1955. He returned to Elba where he worked in the family gravel business. He was united in marriage to Coleen D. Piper on Oct. 25, 1963. He returned to continue his education from 1963 to 1965, attending Kearney State College. Dick then taught music in Wallace, Sutherland and Elba schools. In 1979, he started Tri County Sand and Gravel in Elba, along with other members of the Ingerle family. From 1987 to 1996, he taught Industrial Technology at UNK and he also developed and ran the Mine Safety Training Program for the State of Nebraska. Dick was a member of the Elba United Methodist Church, Carl Mogensen American Legion Post 119 of St. Paul, and the Elks. He had served as the chairman of the Housing Authority in Elba, was president of the Musicians Union in Grand Island form 1963 to 1965 and had played the sax and clarinet with 32 different bands. Dick is survived by his wife, Coleen D. Ingerle of Elba; son and daughter-in-law, Jeffrey and Vickie Ingerle of Cheyenne, WY; daughter and son-in-law, Debra and Randy Mewis of Kearney; four grandchildren, Cary Ingerle, Robert Ingerle and Ashley Ingerle, all of Cheyenne, WY, Nikona and Jon Crocker of Kearney; two great grandchildren, Jac and Charlie Crocker of Kearney; brother and sister-in-law, Allen and Edna Ingerle of Elba; and sister, Carol Maxwell of Challis, Idaho; and nieces and nephews. He was preceded in death by his parents; and a granddaughter, Amanda Mewis. Memorials are suggested to the Elba EMT's or the Elba United Methodist Church.
To order memorial trees or send flowers to the family in memory of Richard J. Ingerle, please visit our flower store.