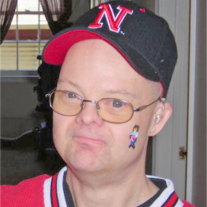 Murel E. Morrison, 60, of Lincoln, formerly of St. Paul, died Monday, March 26, 2018, at Sumner Place Skilled Nursing and Rehabilitation in Lincoln. Memorial services will be 10:30 a.m. Saturday at Christ Lutheran Church in St. Paul. The Rev. Thomas Clark will officiate. Inurnment will be in the Elmwood Cemetery in St. Paul. The family will greet friends one hour before time of the service at the church. Peters Funeral Home of St. Paul is assisting the family. Murel was born on March 2, 1958, in St. Paul, the son of H. Glenn and Alice E. (Huebner) Morrison. Murel grew up in St. Paul and attended a program for the mentally handicapped in Ord, before starting a program in St. Paul. He graduated from St. Paul High School and began a training program in Grand Island. Eventually, Murel returned to St. Paul to live. In 2003, he moved to Lincoln where he lived in several group homes before moving to Lancaster Manor. In 2015, Murel moved to the Blue Valley Lutheran Care Home in Hebron. In 2017, he returned to Lincoln to live at Sumner Place, where he lived the rest of his life. Murel always attended church wherever he lived. Christ Lutheran Church in St. Paul, Grace United Methodist in Lincoln and services at O.U.R. Homes and Blue Valley Lutheran Care Home. He participated in Special Olympics basketball and was an avid sports fan. His favorite teams were the St. Paul Wildcats, Nebraska Cornhuskers, Colorado Rockies and the Denver Broncos. He loved hunting with his brother, Paul and cross country skiing with his brother, Charles and playing UNO. He will be remembered most for being spotted on his bicycle riding around St. Paul and at every sporting event in St. Paul. He also rode his bicycle in many homecoming and GCA Days parades. He enjoyed watching the Dukes of Hazard, Price is Right and all-star wrestling. Murel was always quick with a hug and a kiss for everyone. He is survived by two brothers and one sister-in-law, Charles Morrison of Aurora, CO and Paul and Margi Morrison of Lincoln; niece, Alison and Darrin Riha of Lincoln; nephew, Joe and Laurie Morrison of Lincoln; uncle, Carl Huebner of St. Paul; and cousins. He was preceded in death by his parents. In lieu of flowers, memorials are suggested to the St. Paul High School Band and Athletic Programs.
To order memorial trees or send flowers to the family in memory of Murel Eugene Morrison, please visit our flower store.