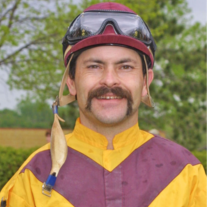 Michael George Ziegler, 52, of Oklahoma City, OK, formerly of St. Paul, NE, who was also affectionately known as “Ziggy” by his family, friends and horse racing fans, departed this life on Tuesday, Nov. 13, 2018, in Oklahoma City. A memorial visitation will be held from 5 to 7 p.m. Friday, Nov. 30th at the Sts. Peter & Paul Parish Life Center in St. Paul, with a 7 p.m. prayer service, led by Deacon Neil Baquet. Peters Funeral Home of St. Paul is assisting the family with local arrangements. Mass of Christian Burial will be 10:30 a.m. Monday, Dec. 17th at St. Casimir's Catholic Church in Wells, MN. Inurnment will be in Our Lady of Mount Carmel Catholic Cemetery in Easton, MN. Visitation will be from 2 to 5 p.m. Sunday, Dec. 16th at Bruss-Heitner Funeral Home in Wells, MN. Ziggy was born on Jan. 21, 1966, in Blue Earth, MN the son of Bob and Gerry (Gorman) Ziegler. He attended Our Lady of Mount Carmel Catholic School in Easton, MN from 1st through 8th grade and graduated from Delavan High School in Delavan, MN in 1984. He married the love of his life, Jackie Christensen of St. Paul, NE on June 18, 1995 in Shakopee, MN, after riding all 10 races that day and winning two. He started his horse racing career in 1985 at Canterbury Park in Shakopee, MN as a hot walker for the Hoss Inman Racing Stables. After he decided he wanted to become a jockey, he went to Colorado and Oklahoma where he started from the ground up and then learned to break babies. He rode his first race on July 18, 1987 at Erie Downs in Erie, PA. Ziggy received his first win on his second career mount the following day aboard Jesting Marble also at Erie Downs. Ziggy's career took him to many tracks throughout the country, but he thoroughly enjoyed riding more in the Midwest and Southwest areas. He spent many years at Ak-Sar-Ben, Fonner Park, Lincoln Race Course and Ag-Park (Columbus Races) in Nebraska, Canterbury Park in Shakopee, MN, Turf Paradise in Phoenix, AZ and Arapahoe Park in Aurora, CO. He currently was at Remington Park in Oklahoma City, OK. Ziggy was loved at all the tracks and had an awesome fan base. Not only was he known as Ziggy, but also as The Man, The Myth, The Mustache, due to his famous mustache that could be seen as he was riding down the stretch. Ziggy rode for numerous trainers throughout his career. He had a close relationship with several of those trainers he rode for, as well as, many owners. Ziggy rode a total of 19,261 races with 2,502 wins. His career abounded thousands of horses he thoroughly enjoyed being aboard, but some of his favorites were: Smoky Path, Lady Jila, Wally Van, Jest For a Trucker, Reach One More, Ruffner and Green Card. But his all-time favorite horse was Get Happy Mister, whom Ziggy was undefeated with in all 9 races that they teamed up together on. Ziggy had his 2,500th win on March 31, 2018, at Fonner Park aboard Green Card, trained by Joe Hawley. He loved his career as a jockey. He was an honest rider that gave 110% to each and every mount. Ziggy also enjoyed hunting, fishing, cheering on the Minnesota Vikings and the Nebraska Cornhuskers, He also loved to cook, at which he was very good at. Ziggy's family was very special to him as he loved them first and foremost, especially his grandchildren. He is survived by his wife, Jackie; children, Krys and Evan Allen of St. Paul, NE, Shelby Ziegler, Bailey Ziegler and Nick Ziegler, all of Lincoln, NE; grandchildren, Kaylee Allen, Ethan Allen, Haylee Allen, Austyn Allen and soon-to-be-born, Britton Allen; his mother, Gerry Ziegler of Easton, MN; siblings, Mark Ziegler of Fairplay, CO, Marty Ziegler of Delavan, MN, Martha and Vince Bleess of Delavan, MN and Mary and Rich Smothers of Amboy, MN; brother-in-law, Wes and Amy Christensen of St. Paul, NE; sisters-in-law, Kelly and Don Troyer and Andrea Christensen, all of Lexington, NE; father-in-law, Bobby Christensen of St. Paul, NE. He is also cherished by many nieces, nephews, numerous relatives and a countless number of friends. He was preceded in death by his father, Bob Ziegler; mother-in-law, Thelma Christensen; grandparents, Roger and Evelyn Ziegler, and George and Marie Gorman; and a great nephew, Jack Flatness. Ziggy had an infectious smile and will be deeply missed by all his family, friends and the horse racing community. Ride On Ziggy, until we meet again! Memorials are suggested to the family's choice.
To order memorial trees or send flowers to the family in memory of Mike "Ziggy" Ziegler, please visit our flower store.

Our Lady of Mount Carmel Cemetery