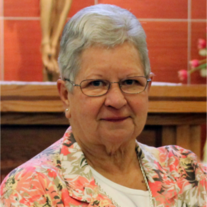 Mary Ann Krzycki, 75, of Elba, died Thursday, Jan. 17, 2019, at Mary Lanning Healthcare in Hastings. Mass of Christian Burial will be 10:30 a.m. Tuesday at St. Joseph's Catholic Church in Elba. The Rev. Richard L. Piontkowski will celebrate the Mass. Burial will be in the St. Joseph's Catholic Cemetery in Elba. Visitation will be Monday from 5 to 7 p.m. at the church, with a 7 p.m. vigil service. Peters Funeral Home of St. Paul is assisting the family. Mary Ann was born on Jan. 6, 1944, at Cotesfield, the daughter of Chester R. and Martha E. (Christensen) Klein. She grew up in the Dannevirke and Elba area and attended Elba Public School and graduated from Elba High School in 1962. After high school she attended a beauty school in Kansas City. She was united in marriage to Steven D. Krzycki on Oct. 3, 1964, in Elba. The couple lived in Elba and she operated a beauty shop in Wolbach. She later opened the Pink Powder Puff Beauty Shop in Elba which she operated for many years. She also worked at the Elba State Bank and drove school bus for Elba Schools. Steve died on Jan. 14, 1985. She then began working at the Howard County Medical Center, first as a nurses aide, later becoming the head of housekeeping. She also continued to operate her beauty shop part-time. She retired from Howard County Medical Center in 2013 and continued to live in Elba the rest of her life. She was a member of St. Joseph's Catholic Church and its Council of Catholic Women of which she was a former president. She was a former Elba EMT, operated the concessions at the Elba ball park for many years and was also very active with the Elba High School Alumni. Mary Ann enjoyed all plants and flowers, watching the cardinals and bluejays in her front yard tree, puzzles, watching game shows and home building and remodeling shows on TV, crocheting doilies and baby blankets and loved to clean and organize. She loved spending time with her children and grandchildren and dearly loved and missed her husband, Steve. She is survived by two sons, Kenny Krzycki of Grand Island and Jeff Krzycki of Elba; one daughter and son-in-law, Diane and Joe Jonak of Elba; eleven grandchildren; six great-grandchildren and another on the way; and two sisters, Marcia Noel of La Junta, CO and Shirley Stratman of Palmer. In addition to her husband, Steve, she was preceded in death by her parents; and sister, Janice Kuszak. Memorials are suggested to the family's choice.
To order memorial trees or send flowers to the family in memory of Mary Ann Krzycki, please visit our flower store.