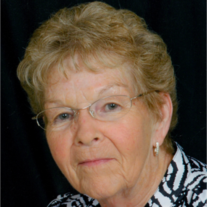 Marilyn A. Lewandowski, 79, of Omaha, formerly of Ansley, died Wednesday, Sept. 7, 2016, at Immanuel Fontenelle in Omaha. Mass of Christian Burial will be 10 a.m. Monday at St. Josaphat's Catholic Church in Loup City. The Rev. Richard L. Piontkowski will officiate. Inurnment will follow in the Arcadia Cemetery in Arcadia. Visitation will be Sunday from 5 to 7 p.m. at the church, with a 6 p.m. vigil service. Peters Funeral Home of Loup City is assisting the family. Mrs. Lewandowski was born April 7, 1937, on the family farm east of Arcadia, the daughter of Chester H. and Mary C. (Evans) Parker. As a child, Marilyn enjoyed playing paper dolls with her sister, Alice, and swimming in the irrigation canals and river. As a teenager she enjoyed attending movies and loved country music and dances. She attended Arcadia Public Schools where she was a good student and was the Drum Majorette. She was united in marriage to Orville Max Gross in Oct. 1952, in Broken Bow. To this union two sons were born. She was united in marriage to Fred A. Lewandowski on Oct. 10, 1958, in Ord. To this union five children were born. The couple farmed in the Mason City area until 1977, when they moved to Ansley. In 1980, she began working for Becton Dickinson and Company in Broken Bow until her retirement in 1999. In 2010, she moved to Omaha, where she lived the rest of her life. She was a longtime member of the Ansley American Legion Auxiliary . She volunteered for many bloodmobiles and marched in many parades with the Auxiliary. She also enjoyed walking and having coffee with her Ansley friends. She loved Cornhusker volleyball and football and the Chicago Bears and watching Ansley athletics. But most of all, Marilyn dearly loved her family. She is survived by six sons and three daughters-in-law, Mike and Marge Gross of Aurora, Al and Deb Gross of Grand Island, Pat Lewandowski of Mason City, Martin and Julie Lewandowski of Lincoln, Tony Lewandowski of Ansley and Roger Lewandowski of Omaha; one daughter and son-in-law, Lisa and Blake Wilson of Omaha; 19 grandchildren and 14 great grandchildren; and five sisters and two brothers-in-law, Alice Gibson of Monte Vista, CO, Connie Stewart of Broken Bow, Nancy and Cork Einspahr of Arcadia, Vickie and Larry Hanks of Amherst and Mary Lou Peterson of Broken Bow. She was preceded in death by her parents; her husband, Fred, on April 10, 2013; two sisters, Gladys Scott and Norma Reichstein; and three brothers, Robert, Gene and Don Parker. Memorials are suggested to the Lewandowski family, for later designation. Please sign the guestbook for Marilyn by visiting www.petersfuneralhome.net.
To order memorial trees or send flowers to the family in memory of Marilyn A. Lewandowski, please visit our flower store.