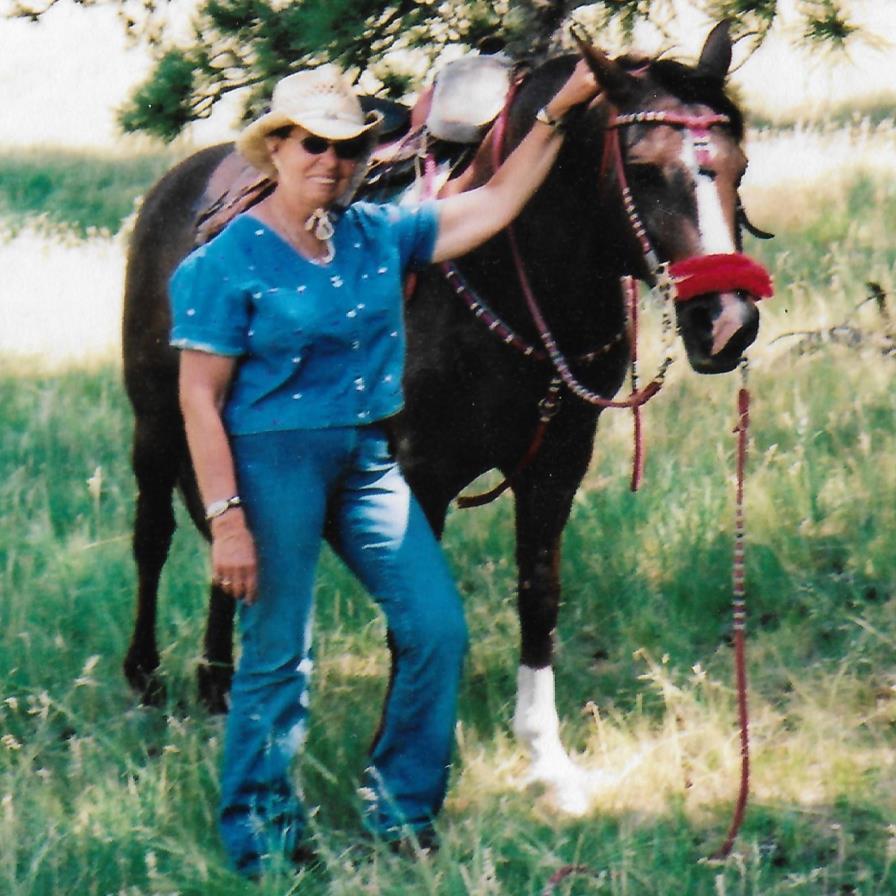 Lillian M. Nowak, 87, of St. Paul, died Thursday, Dec. 3, 2020, at Brookefield Park in St. Paul. Private family funeral services will be 10:30 a.m. Monday at Peters Funeral Home in St. Paul. Pastor Jay Towell will officiate. Burial will be in the Elmwood Cemetery in St. Paul. Visitation without the family present will be Sunday from 2 to 4 p.m. at the funeral home. All CDC guidelines will be followed regarding social distancing. Face masks are required at the visitation and the private family funeral. The service will be livestreamed on Peters Funeral Home Facebook page. The direct link for that page is www.facebook.com/PetersFuneralHomeSP. Lillian was born on Feb. 18, 1933, on the family ranch east of St. Paul, the daughter of Bernhard C. “Ben” and Hazel M. (Wenn) Wulf. She attended District No. 12 Howard County rural school. As a young girl she was very in working with her family on the ranch with the cow/calf operation and haying. It was also at this time that she developed an affinity for horses. She was united in marriage to Avre D. Papst on April 21, 1956, at Grand Island. To this union two children were born, Jackie and Tony. The couple lived in Lincoln and she worked for a department store. The couple later divorced and she returned to the family ranch to help her family start a dairy operation. She was united in marriage to Roger J. Nowak on Feb. 18, 1964, at Grand Island. To this union three sons were born, Shane, Shawn and Travis. The couple farmed west of St. Paul in the midway area. Lillian continued to live on the farm until retiring in 2017. At that time, she moved to an acreage on the edge of St. Paul with her beloved animals. Her children said she “brought the farm to town.” Lillian was a member of Our Savior’s Lutheran Church of Dannebrog; a member of the neighborhood “Happy Hour” club; was a 4-H leader of the Jolly Cowhands and Easy Riders clubs for over 25 years; she was a member and president of the Spring Creek Saddle Club for over 20 years. In 2000, she took part in a 180-mile, 8-day Longhorn Cattle Drive in freezing temperatures from Valentine to Fort Robinson. Lillian was always active with her children and grandchildren, loved the Howard County fair, was a self-taught organist and grew huge gardens from which her family would all gather together to can the produce. She also raised many chickens and would have all her family come together to butcher them. Her children feel that she was the last of the tough pioneer women. She is survived by her children, Jackie Urbanski and Alden Stein of Desert Hills, AZ, Tony and Val Papst of Farwell, Shane Nowak and Kristie Peterson of St. Paul, Shawn and Karen Nowak of Gillette, WY and Travis and Tanya Nowak of Auburn, WA; 13 grandchildren; 23 great-grandchildren; and one brother, LaVern Wulf of St. Paul; and her former husband, Roger Nowak of St. Paul. She was preceded in death by her parents. Memorials are suggested to the family for later designation.
To order memorial trees or send flowers to the family in memory of Lillian M. Nowak, please visit our flower store.