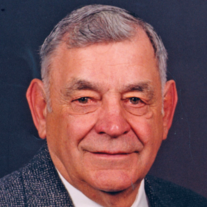 Lavern F. Wojtalewicz, 90, of St. Paul, died Monday, Oct. 8, 2018, at the Howard County Medical Center in St. Paul. Mass of Christian Burial will be 10:30 a.m. Friday at Sts. Peter & Paul Catholic Church in St. Paul. The Revs. Rayappa Konka and Richard Piontkowski will concelebrate the Mass. Burial will be in the Elmwood Cemetery in St. Paul. Visitation will be Thursday from 6 to 8 p.m. at the church. Peters Funeral Home of St. Paul is assisting the family. Lavern was born on Aug. 7, 1928, at Loup City, the son of Frank and Mary (Mrkvicka) Wojtalewicz. He grew up on a farm near Farwell and received his education at Farwell Public School and graduated from Farwell High School in 1945. He was united in marriage to Jeanine M. Jensen on Sept. 29, 1947, at Farwell. The couple first lived in Farwell. In the 1950's they moved to Central City, later moving to a farm north of Central City. In 1963, they moved to a farm west of St. Paul, where Lavern farmed the rest of his life. He was a member of Sts. Peter & Paul Catholic Church and Knights of Columbus Council No. 1918 both of St. Paul. Lavern enjoyed playing cards, dancing, casino trips, woodworking, fishing, socializing, telling jokes and stories, good Polish food, and slowly driving around checking on the farm, and of course, supervising. Lavern loved his family and the times they spent together. He is survived by his children and spouses, Jerry and Vicki Wojtalewicz of Omaha, Todd and Kendra Wojtalewicz of St. Paul and Jeanette and Denny Santin of Grand Island; 8 grandchildren, Amy Mancini of Denver, CO, Jennifer and Bryan Dubas of Fullerton, Alexis Santin of Washington DC, Allison and Thomas Raetz of Omaha, Erin and Justin Loehr of Omaha, Cole Wojtalewicz and fiancée, Rachael Dvorak of St. Paul, Trey Wojtalewicz and girlfriend, Alyssa Jirkovsky of St. Paul and Kyla Wojtalewicz of Lincoln; 10 great-grandchildren, Peyton, Griffin and Remi Mancini, Tori and Cheyenne Ostrander, Dana Dubas, Cooper, Charlotte and Reese Raetz, and Josie Loehr. He was preceded in death by his parents; wife, Jeanine on March 21, 2017; son, Richard L. “Dick” Wojtalewicz on July 14, 1968; grandson, Adam Wojtalewicz on Sept. 22, 2004; brothers, Floyd, Harry and Edwin Wojtalewicz; and sisters, Maxine Nowak and Zeta Sekeras. Memorials are suggested to the Alzheimer’s Association or Sts. Peter & Paul Parish Life Center.
To order memorial trees or send flowers to the family in memory of Lavern F. Wojtalewicz, please visit our flower store.