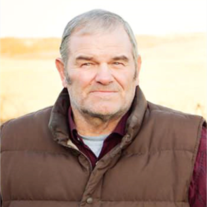 Kenneth Lee “Ken” Svoboda, 64, St. Paul beef producer, husband, father of six, and grandfather of six, died on Saturday, Dec. 14, 2019, at the Howard County Medical Center in St. Paul, after a difficult six-year journey with colorectal cancer. Friends are invited to celebrate his life and Mass of Christian Burial 10:30 a.m. Friday at Sts. Peter & Paul Catholic Church in St. Paul. The Rev. Rayappa Konka and Deacon Neil Baquet will concelebrate the Mass. A meal will be served immediately following the Mass. A family inurnment will be held that afternoon in the Fairdale Sunrise Cemetery north of St. Paul. Visitation will be Thursday from 5 to 7 p.m. at the church, with a 7 p.m. Parish Rosary. Peters Funeral Home of St. Paul is assisting the family. Ken was born August 6, 1955 in David City, Nebraska to Leander and Anita (Ratkovec) Svoboda, and grew up outside of Rising City with his five sisters and two brothers on a farm. The family raised cattle and crops, and his kids remember him telling tales of cattle on the loose in the streets of Omaha and driving the farm truck to the stockyards when he was young. Ken worked on the farm from a very early age and learned to love the family business. Kenny, as his friends and family called him, went to country school not far from his home – traveling uphill both ways on a welded together bicycle – until 6th grade. He graduated from David City High School (where he was a champion wrestler) in 1973 and joined his father working on the farm. One of Kenny’s favorite hobbies was racing stock cars at the dirt tracks around Nebraska. He met Beth Hiller and they were married in Bellwood on May 5, 1978. Ken and Beth moved to St. Paul, Nebraska in 1985 where they built a successful beef operation together. Ken’s work gave him purpose; he loved to work with his hands. Toward the end of his life, he said that he felt privileged to do the things that he’d done and as his health declined, his biggest wish was to be outside working. He had a strong work ethic and a robust sense of fairness; Ken knew and supported his neighbors and they supported him right back. Besides his work, Ken was never happier than when he was watching a good stock car race on a hot summer evening, cheering on his brother and nephews. As Ken’s health waned, he appreciated the support of friends, family, and the community. He was surrounded by joyful stories, good memories, and so much care and comfort. Ken is survived by his wife Beth; children and grandchildren and their spouses , Paula and Ryan (Leah and Sarah) Carlson of Grand Island, Colleen Svoboda and George (Maximus and Lilyana) Parker of Lincoln, Kim and James Watson of Lincoln, Kay and Cody (Hannah and Owen) Taylor of Muscatine, Iowa, Chuck and Ashley Svoboda of St. Paul, and Chris and Kayla Svoboda of St. Paul; mother Anita Svoboda of David City; and siblings Carol (Mike) Svatora of Newark, OH, Patty (Mike) Egger of Martell, Marilyn (Bruce) Schmit of Bellwood, Tom (Deb) Svoboda of David City, Ron Svoboda of York, Sharon (Ron) DeWispelare of David City, and Diane (Tim) Kozisek of David City. Ken’s father Leander and nephew Tad DeWispelare preceded him in death. In lieu of memorials, Ken’s family encourages you to invest in your own health by getting screened for colorectal cancer according to recommended guidelines (especially you farmers around age 50). Memorials are also welcome and may be given to the family for later designation.
To order memorial trees or send flowers to the family in memory of Kenneth L. "Ken" Svoboda, please visit our flower store.