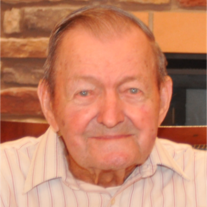 John J. Vincik, 95, of St. Paul, died Saturday, Feb. 18, 2017, at Good Samaritan Society – Grand Island Village. Services will be 2 p.m. Tuesday at Peters Funeral Home in St. Paul. The Rev. Ray Kosmicki will officiate. Burial will be in the Elmwood Cemetery in St. Paul with graveside military honors provided by Carl Mogensen American Legion Post 119 of St. Paul. Visitation will be one hour before time of the service on Tuesday. Peters Funeral Home of St. Paul is assisting the family. Mr. Vincik was born on July 23, 1921, at St. Paul, the son of Joseph and Caroline (Tuma) Vincik. John grew up on the family farm southeast of St. Paul in the Bunker Hill area and received his education at Bunker Hill school. He served in the United States Navy during World War II aboard the USS Tennessee in the Pacific Theatre. He served from Aug. 17, 1942 to Dec. 12, 1945. John was the recipient of numerous medals including the Purple Heart. He was united in marriage to Gladys M. Matousek on June 2, 1947, at Sts. Peter & Paul Catholic Church in St. Paul. The couple lived, farmed and operated a Grade A dairy on the Vincik home place for close to 70 years. John's life was his farm, his wife, his children, his grandchildren and his Country. He loved the deer that crossed his land and loved feeding the birds. He never met a cat or dog that he didn't like and enjoyed his favorite calf, Baby. He was a member of Sts. Peter & Paul Catholic Church, Knights of Columbus Council No. 1918, Carl Mogensen American Legion Post 119 of which he was a past Commander, member of the Drum and Bugle Corp of American Legion Post 119, and served on Dist. 15 school board. He also enjoyed bowling league, welding and played the accordion by ear. Over the years he played with the Polka Key Notes, Polka Gems and the Polka Pals. Whether he was playing for a wedding or anniversary, he always made sure the honored couple received a recording of the music played at their dance. He is survived by his wife of almost 70 years, Gladys; three children and spouses, Lon and Chris Vincik of Grand Island, Linda and Stan Obermiller of Johnson Lake and Ken and Carol Vincik of St. Paul; five grandchildren and spouses, Stephen Vincik and Katie Hilburn of Omaha, Andrew and Lisa Vincik of Omaha, Brian and Peggy Vincik of Overland Park, KS, Keith and Jana Vincik of Grand Island and Jessica and Dan Piskorski of Ord; and nine great grandchildren, Bryce, Brayden, Kate, James, Aurora, Alice, Emma, Adam and Emily. He was preceded in death by his parents. Memorials are suggested to the American Legion New Building Fund, Comfort Dog program or to the family's choice.
To order memorial trees or send flowers to the family in memory of John J. Vincik, please visit our flower store.