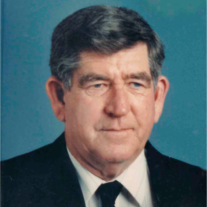 John (Marlyn) Ludemann, 82, of St. Paul, died Wednesday, Dec. 26, 2018, at his daughter's home in Grand Island, with family at his side. To honor John's wishes, cremation was chosen. A Celebration of Life will be 11 a.m. Wednesday, Jan. 2, 2019, at Peters Funeral Home in St. Paul. Pastor Jay Towell will officiate. A private family inurnment will be in the Elmwood Cemetery in St. Paul, that morning prior to the services. John was born on June 15, 1936, at Mills, Nebraska, the son of Walter and Caroline (Haman) Ludemann. Shortly after enlisting in the U.S. Navy, he was united in marriage to Mardell M. Maertins, on Feb. 25, 1957, in Herrick, South Dakota. The couple lived in California for a while, then worked construction in various places around Nebraska before settling in St. Paul. He is survived by his children and spouses, Susan and John Moore of Grand Island, Laurie and Wayne Gress of Grand Island, Cullen Ludemann of Oxford, and Cory and Trish Ludemann of Hastings; five grandchildren, Rachel Moore, Matthew Gress, Meagan Gress, John Ludemann and Kate Ludemann; sister, Donna Vroegh of Eddyville, Iowa; sisters-in-law, Carol Ludemann of North Platte and Donna Ludemann of Stanton. He was preceded in death by his wife, Mardell on June 10, 2012; his parents; in-laws, William and Ida Maertins; one sister and brother-in-law, Ramona and Darrell Carr; three brothers, Bernie Ludemann, Carl Ludemann and Ward Ludemann; brother-in-law, Clarence Vroegh; and nephew, Bart Vroegh. Memorials are suggested to the family for later designation.
To order memorial trees or send flowers to the family in memory of John Ludemann, please visit our flower store.