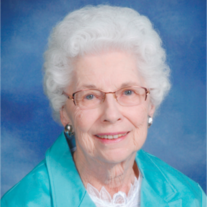 Janette B. Novakowski, 89, of St. Paul, died Monday, July 2, 2018, at Brookefield Park in St. Paul. Mass of Christian Burial will be 10 a.m. Friday at Sts. Peter & Paul Catholic Church in St. Paul. Rev. David Rykwalder will celebrate the Mass. Burial will be in Westlawn Memorial Park Cemetery in Grand Island. Visitation will be Thursday from 5 to 7 p.m. with a 7 p.m. vigil service at Peters Funeral Home in St. Paul, with Deacon Neil Baquet officiating. Janette Barbara Novakowski was born on April 22, 1929, in Sherman County to Alex and Rose (Zoucha) Kosmicki. She received her education in rural Sherman County schools and St. Josaphat's Parochial School. As a teenager, Janette did domestic work, helping other families as they welcomed a new baby. She later worked at the Cornhusker Army Ammunitions Plant in Grand Island. She was united in marriage to John (Jack) Novakowski on Oct. 20, 1952, at St. Josaphat's Catholic Church in Loup City. To this union four children were born, Jacqueline, Jerry, Janice and James. They lived in the Boelus and Farwell areas, moving to St. Paul in 1996. Jack passed away on May 31, 1997. She was a member of Sts. Peter & Paul Catholic Church and its Council of Catholic Women. She was an active former member of St. Anthony's Catholic Church in Farwell, where she served as a Parish Council member and also many offices in the Council of Catholic Women Janette was proud of her family and enjoyed her time with them. She loved to dance and also enjoyed gardening (especially flowers), needlework and visiting. Hospitality was very important to her. Even during her time at Matelyn and Brookefield Park, she had to have treats on hand to offer visitors. She is survived by her children and spouses, Jacqueline and Ron Gorecki of Dannebrog, Jerry and Mary Novakowski of Grand Island, Janice and Greg Gallaway of Collierville, TN and James Novakowski of Grand Island; seven grandchildren and seven great-grandchildren, with another two to arrive soon. In addition to her husband, Jack, she was preceded in death by her parents; and a brother, Simon Kosmicki. Memorials are suggested to the Special Olympics or Sts. Peter & Paul Parish Life Center.
To order memorial trees or send flowers to the family in memory of Janette B. Novakowski, please visit our flower store.