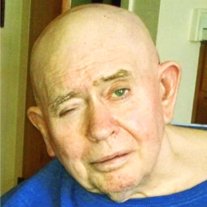 Henry J. Koperski, 80, of Farwell, died Tuesday, July 9, 2019, at the Fullerton Care & Rehabilitation Center in Fullerton, just a few days short of his 81st birthday. Mass of Christian Burial will be 10 a.m. Friday at St. Anthony's Catholic Church in Farwell. The Revs. Matthew Koperski and Rayappa Konka will concelebrate the Mass. Burial will be in St. Anthony's Catholic Cemetery near Farwell, with graveside military honors by Carl Mogensen American Legion Post 119 of St. Paul. Visitation will be one hour before time of services at the church. Peters Funeral Home of St. Paul is assisting the family. Henry was born on July 15, 1938, at Farwell, the son of John and Rose (Robak) Koperski. Henry received his education at Farwell Public School. He served in the United States Army in a tank division, serving in Korea from April 1959 to March 1961. He was united in marriage to Rose M. (Zelazny) Bruntz on Nov. 16, 1974, in Grand Island. Henry was born and raised with love for the land that he and generations of his family had care for. His years of farming experience and lifelong commitment made him very rooted in the land he loved. When Henry wasn’t taking care of the farm, he enjoyed his time with family which usually meant some card games with his brothers and brothers-in-law. The only thing in Henry's eyes that was more important than the day's chores was his family. Henry's legacy of hard work and self-sacrifice will be treasured by all of his family and friends. He is survived by his wife, Rose of St. Paul; siblings and spouses, Pete and Dolores Koperski of Platte City, MO, Agnes and Ron Lewandowski of Grand Island, JoAnn and Justin Kuszak of Ashton, John and Janet Koperski of Ogallala, Ben and Mary Koperski of Cody, WY, Marie Platek of St. Paul and Sally and Tom Mudloff of St Paul; sisters-in-law, Darlene Koperski of Boelus, Roberta Koperski of Denver, CO and Margaret “Muggs” Koperski of Lincoln; and brother-in-law, Maurice Fletcher of Hiawatha, KS. He was preceded in death by his parents; brother and sister-in-law, Ted and Patricia Koperski; sisters and brothers-in-law, Delores Grimes Fletcher and Daniel Grimes, Frances and Robert Kush; brother-in-law, Daryl Platek; sister-in-law, Barbara Koperski; half brothers, Albin, Emil, Louie, Tony and Dominic Koperski; and one half sister, Alice Ziola. In lieu of flowers, memorials are suggested to the Fullerton Care & Rehabilitation Center or to the family's choice.
To order memorial trees or send flowers to the family in memory of Henry J. Koperski, please visit our flower store.