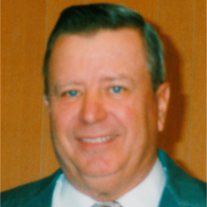 Harlan H. Kroeger, 79, of Dannebrog, died Sunday, Feb. 5, 2017, at the Hamilton Manor in Aurora. Services will be 10:30 a.m. Thursday at Faith Lutheran - Nysted St. Peder's Church. The Rev. Robert Carlson, Jr. will officiate. Burial will be in the Oak Ridge Cemetery in Dannebrog. Visitation will be Wednesday from 5 to 7 p.m. at Peters Funeral Home in St. Paul. Mr. Kroeger was born on March 10, 1937, on the family farm southeast of Dannebrog, the son of Harvey and Evelyn (Schimmer) Kroeger. Harlan attended country schools near Dannebrog and was a 1954 graduate of Dannebrog High School. As a young man he served in the Nebraska National Guard for six years. He was united in marriage to Mary Ann Wichmann on April 20, 1958, at Worms. The lived their entire married life on a farm south of Dannebrog. It was there that they raised their two children Kurt and Kolette and operated a dairy for over 30 years. Mary Ann died on Jan. 11, 1996. Harlan was united in marriage to LaJean (Dibbern) Muller on Jan. 24, 1998, at Grand Island. Harlan continued to farm for a number of years. He was a member of Faith Lutheran – Nysted St. Peder's Church, the Platt-Duetsche of Grand Island and the Dannebrog Country Club. He enjoyed playing cards in numerous card clubs and at the Danish Baker in Dannebrog. He loved dancing, traveling and golfing in his later years. He is survived by his wife, LaJean of Dannebrog; son and daughter-in-law, Kurt and Kathy Kroeger of Dannebrog; daughter and son-in-law, Kolette and Rev. Robert Carlson, Jr. of Dannebrog; seven grandchildren; brother and sister-in-law, Darryl and JoAnne Kroeger of Dannebrog; four step-children; eleven step-grandchildren and nine step-great-grandchildren. In addition to his wife, Mary Ann, he was preceded in death by his parents. Memorials are suggested to the family's choice.
To order memorial trees or send flowers to the family in memory of Harlan H. Kroeger, please visit our flower store.