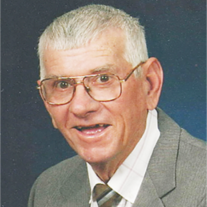 George J. Szatko, Sr., 83, of St. Paul, died Tuesday, Feb. 13, 2018, at the Greeley Care Home in Greeley. Mass of Christian Burial will be 10:30 a.m. Wednesday, at Sts. Peter & Paul Catholic Church in St. Paul. The Rev. Rayappa Konka will celebrate the Mass. Burial will be in the Elmwood Cemetery in St. Paul, with graveside military honors by Charles Martin American Legion Post 186 of Greeley. Visitation will be Tuesday, from 5:30 to 7:30 p.m. at the church with a 7:30 p.m. rosary. Peters Funeral Home of St. Paul is assisting the family. George was born on Dec. 4, 1934, at Greeley, the son of Joseph A. and Gertrude (Kowalski) Szatko. He grew up in Greeley where he attended Sacred Heart Catholic School. He served in the United States Army from May 1954 to March 1957, having a tour of duty in Germany. He was officially discharged from the Army Reserves in 1962. He was united in marriage to Norma J. Witt on April 23, 1955, in Louisville, Kentucky. The couple lived and raised their family in St. Paul. Over the years George was the manager of the American Legion Club in St. Paul, worked as a propane delivery and serviceman, worked at Christensen Sand & Gravel and for Dinsdale's in Palmer. He also raised cattle near Cushing. George and friends took many a memorable trip to Louisville for the Kentucky Derby. In 2015, he moved to Kerry Kourt in Greeley to be closer to Norma, who was a resident of the Greeley Care Home. In 2017, he joined her there, where he lived the rest of his life. He was a longtime member of Sts. Peter & Paul Catholic Church in St. Paul and Burton-Beyer American Legion Post 120 of Palmer. In 2015, he became a member of the Charles Martin American Legion Post 186 of Greeley. George had a gambler's heart! He loved casino trips and playing Keno, Lotto and Powerball every week. In his younger days he always had a large garden, out of which he made his own horseradish and dill pickles. He also had a “Polish Hunting License” and would make canned deer. George loved cooking for family and friends, no matter the time of day or night. He made many a roaster of raccoon, snapping turtle and whatever for the patrons of the Office Bar in St. Paul. He also loved watching baseball games sitting in his truck at the St. Paul Ball Fields and visiting his numerous friends in all the area nursing homes. His drink of choice was Dr. Pepper and he never said no to a Hot Beef Sandwich at the Skyline Cafe in St. Paul. He is survived by his wife, Norma J. Szatko of the Greeley Care Home in Greeley; one son, George Szatko, Jr. of Pace, FL; two daughters and sons-in-law, Trudy and Bruce Edwards of Tulsa, OK and Jeanne and Gregg Boyce of Show Low, AZ; 6 grandchildren and 11 great grandchildren; one sister and brother-in-law, Leona and Gary Stone of Columbus; two brothers and three sisters-in-law, Joseph and Shirley Szatko of Columbus, Anthony and Pat Szatko of Columbus, and Mary Szatko of Platte Center. He was preceded in death by his parents; son, Anthony James Szatko; sister and brother-in-law, Helen and Virgil Brezenski; brother, Edward Szatko; nephew, John Brezenski and niece, Sharon Brezenski. Memorials are suggested to the Charles Martin American Legion Post 186 of Greeley.
To order memorial trees or send flowers to the family in memory of George J. Szatko, please visit our flower store.