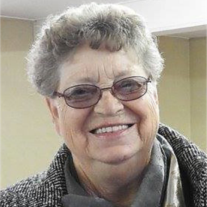 Donna L. (Gorman) Jasnoch, 68, of Chinook, MT, formerly of Loup City, passed away, Saturday, March 4, 2017, in Great Falls, MT. Mass of Christian Burial will be 10:30 a.m. Saturday, March 18, 2017, at St. Josaphat's Catholic Church in Loup City. The Rev. Richard L. Piontkowski will officiate. Private family inurnment will be held at a later date in the Evergreen Cemetery in Loup City. Peters Funeral Home of Loup City is assisting the family. Donna was born on June 30, 1948, in Hill County, MT, to John and Margaret (Monroe) Gorman. She lived in Chinook, MT until marrying her husband, Thomas A. Jasnoch on July 1, 1972, in Loup City. Together they operated the Rancher's Cafe at Loup City Livestock, and managed the American Legion Club for several years. Tom died on May 22, 1996. Donna had many hobbies, but her passion was taking care of her family and those in need. She moved back to Chinook in 2001 to tend to her father, who passed away following a long battle with cancer. She is survived by her daughter and son-in-law, Jane and Luke Rihanek of Lincoln; and son and daughter-in-law, Brad and Jessica Jasnoch of Lincoln; two sisters and one brother-in-law, Barbara Clark of North Platte and Debra and Bob Anderson of Columbus, MT; and two brothers, Dan Gorman of Chinook, MT and John Gorman, Jr. of Glendive, MT; six grandchildren and many nieces and nephews. In addition to her husband, Thomas , she was also preceded in death by her parents; and two sisters, Jackie and Terri Gorman. In lieu of flowers and plants, the family requests that memorials be given to the family's choice.
To order memorial trees or send flowers to the family in memory of Donna L. Jasnoch, please visit our flower store.