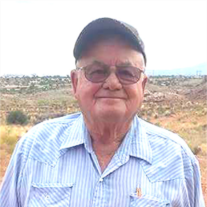 Donald R. “Don” Anderson, 82, of St. Paul died unexpectedly, Thursday, Aug. 8, 2019, at the Howard County Medical Center in St. Paul. Services will be 10:30 a.m. Monday at the United Methodist Church in St. Paul. The Rev. Dr. Russ Anderson and Rev. Martha Voigt will officiate. The family requests that everyone dress casually. Don will be cremated following the services, with a private family inurnment in the Elmwood Cemetery in St. Paul, at a later date. Visitation will be Sunday from 3 to 5 p.m. at the church. Peters Funeral Home of St. Paul is assisting the family. Memorials are suggested to the family for later designation. Don was born on Dec. 5, 1936, on the family farm, north of Wolbach, the son of Bart A. and Leona E. (Nestor) Anderson. He grew up on the family farm and attended Greeley County rural schools. In the 1950's, he moved to Moab, Utah, where he worked in the uranium mines. It was there that he met the love of his life, Mary H. Johnson. The couple was married on April 24, 1958, in Moab. In 1959, the couple moved back to Nebraska, where they farmed near Wolbach, with his brother, Art. In 2012, the couple retired and moved into St. Paul, where he lived the rest of his life. Don enjoyed spending time with all his family, playing cards, watching Mutual of Omaha “Wild Kingdom” on television and ice cream. He loved playing jokes on his children and grandchildren and taking “business” casino trips. His favorite saying was, “It's a natural cause”. He is survived by his wife, Mary of St. Paul; children and spouses, Julie Haller and Loren Haller of Fruita, CO, Donald and Norma Anderson of Seward, Terrie Heaps of St. Paul, Larry Anderson and Victoria Dobson of Fullerton, and Gary and Heather Anderson of Papillion; 21 grandchildren and 21 great-grandchildren; three sisters and one brother-in-law, Josie Knapp of Grand Island, Sandra Bittner of Clarks and Janet and Duane Bittner of Alda; one brother and sisters-in-law, Art and June Anderson of St. Paul; and numerous brothers-in-law and sisters-in-law. He was preceded in death by his parents; infant son, James Anderson; infant granddaughter, Makayla Anderson; infant great grandson, Dirk W. Haller; son-in-law, James Heaps; brother, Victor Anderson; sister and brother-in-law, Virginia and Francis Grosch; in-laws, Ed and Dorthy Johnson; and brother-in-law, Ted Johnson.
To order memorial trees or send flowers to the family in memory of Donald R. Anderson, please visit our flower store.